In 2007, the ZKM | Institute for Music and Acoustics and the EXPERIMENTALSTUDIO for acoustic art in Freiburg inaugurated the annual Giga-Hertz-Award for electronic music. This new international music award with its future-oriented concept exists thanks to the initiative and commitment of ZKM director Peter Weibel. The award is funded by the city of Karlsruhe and the Federal State of Baden-Württemberg.

The Giga-Hertz-Award addresses composers working in the areas of electronic and acousmatic music. A Grand Prize and four Special Prizes are awarded once a year by an international jury. The Grand Prize honors the artistic achievements of outstanding composers. It is not awarded in the framework of a public competition but selected from the nominations of the jury members. The four Special Prizes serve to initiate and support new projects, and are aimed especially at young composers in electronic and acousmatic music.

The Giga-Hertz-Award is in memory of the world-famous physicist Heinrich Hertz (1857–1894), who taught at the Karlsruhe technical university at the end of the nineteenth century; it was there that he discovered electromagnetic waves.

This award for electronic and acousmatic compositions is unique in Germany and underlines the importance of electronic music, especially in Baden-Württemberg: the award is supported by the most important German studios for electronic music — Freiburg’s EXPERIMENTALSTUDIO for acoustic art and the ZKM | Institute for Music and Acoustics (IMA) in Karlsruhe. The patron of the Giga-Hertz-Award is the Minister-President of Baden-Württemberg Guenther H. Oettinger.

The Grand Prize of € 15,000 goes to the British composer Jonathan Harvey for his extensive oeuvre at the interface between electronic and instrumental music. The four Special Prizes, each worth € 8,000, go to the French composer Mark Andre, Daniel Mayer from Austria, Flo Menezes from Brazil, and Vassos Nicolaou from Cyprus, who lives in Cologne.

The Special Prizes are grants with which the artists will be able to realize their submitted, prize-winning projects, either at the ZKM | Institute for Music and Acoustics or the EXPERIMENTALSTUDIO for acoustic art in Freiburg.

The Awards Ceremony with the artists will take place on 24 November 2007 at 20.00 hrs. at the ZKM | Centre for Art and Media Karlsruhe. There will be a supporting program with concerts and a symposium, “c³ubic: Sound in Space ” [+programme info here]. 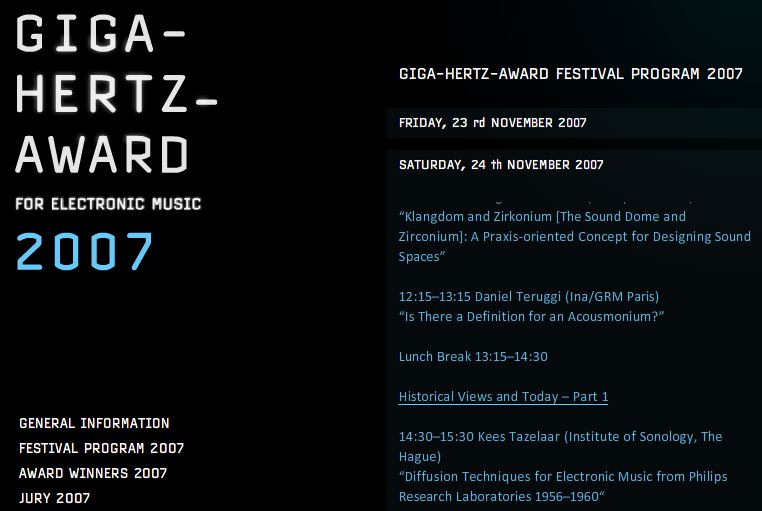