When prominent scientist Stephen Wolfram published A New Kind of Science in 2002, it was immediately hailed as a major intellectual landmark. Today the paradigm shift that Wolfram’s work initiated is starting revolutions in a remarkable range of areas of science, technology–and the arts. WolframTones is an experiment in applying Wolfram’s discoveries to the creation of music.

WolframTones works by taking simple programs from Wolfram’s computational universe, and using music theory and Mathematica algorithms to render them as music. Each program in effect defines a virtual world, with its own special story–and WolframTones captures it as a musical composition. 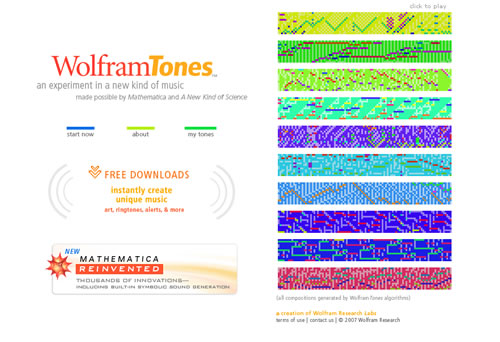