Soundscape Composition and the Subversion of Electroacoustic Norms1

The field of electroacoustic presents a number of potential challenges to assumptions about what Western art music is: as John Cage noted as early as 1937, it opens up the entire field of sound as musical sources. Barry Truax states that “the serious use of environmental sound in music is potentially disruptive and even subversive to the established norms of the artistic field” (1995: 1). Electroacoustic music can shift attention from pitch relationships to timbral possibilities of sounds. As a result, much electroacoustic music confounds traditional forms of musical analysis (Tenney 1986: 4). Soundscape composition, with its focus on environmental sound, could be considered a type of electroacoustic music that is particularly resistant to traditional analysis and categorization. 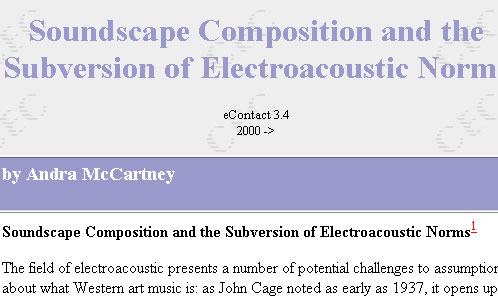