SuperCollider Symposium and Courses
September 17 – 23
The Hague, The Netherlands

Concerts:
Two concerts and a club night including a live-coding jam (at TodaysArt Festival)

Listening Room & Installations:
During the week or in the weekend.

SuperCollider is cutting edge audio software, of unparalleled power and flexibility. Those who use it tend to want to defy the conventions of standard software, to experiment with their own interfaces, sound synthesis and processing, and enable new musical interactions and sound worlds.

Technical note: The infamous/legendary/scary SuperCollider software is a highly customisable and super-efficient audio programming language originally written by James McCartney. It’s maintained by a host of developers as an open source project, and is free and cross platform, running on OS X, Linux and Windows. SuperCollider was built for live music, for network music, for algorithmic music, and for use in art installations. All sound synthesis and interaction runs in realtime. 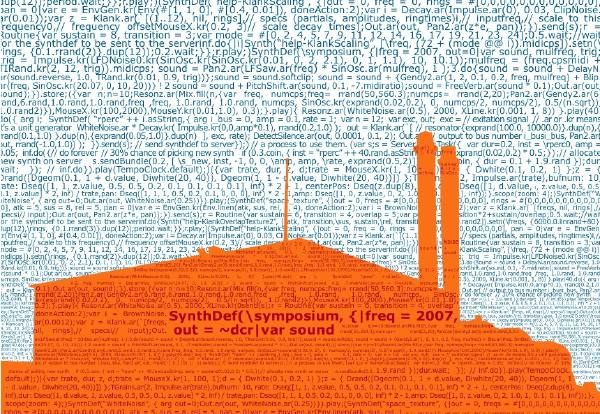