What is it?
The Sound Extension Project is a portfolio of electro-acoustic compositions weaving music, sound animation and drama into a stimulating surround-sound listening experience.

Why Extension?
The compositions are primarily an extending of natural sound. Through digital animation familiar sounds take on new and often very human expression: tiny water drops turn into huge gestures, rivers and ice transform into magical water creatures, trees begin to groan, sing and even walk around the room!

A Film Without The Picture…And More!
Owing to its combining of music, drama and sound acoustics The Sound Extension project is like a film without a picture, and more! Conventional cinema films have visuals holding concentration on events in front of you, surround sound is used as an addition to the front-focused picture narrative. The Sound Extension Project uses an additional 3 speakers for playback (8.1 as opposed to cinema 5.1 sound) and has no visual when playing, much more emphasis is given to side and rear sound placement. All directions are equal, the sound is the movie, your imagination the screen. Sounds heard will create worlds, stories and pictures in your mind that either would cost millions of pounds to visually create or simply would not be possible! 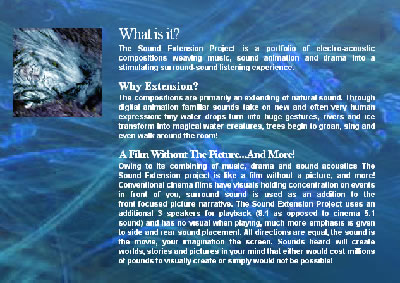