Past Remixed with Present

“Our experience of reality is strongly dependent on the synchronicity of our senses. We must, for instance, hear or touch what we see while we see it, in order to be able to determine reality and in order to decide what to do or how to react. The decoupling in time of sight and sound – like when we first see the lightning and then hear the thunder – can create a disturbing irritation when it affects our immediate surroundings: imagine that you would only hear the cars passing you on the street after they have already past, or that you hear conversations which were held minutes ago in a different location from where you are.

Sonic Interface experiments with human perception by amplifying and manipulating the synchronicity of auditory environment. Equipped with a portable hearing device made of a computer and headphones, the user is invited to walk around the city’s public spaces such as squares, shopping malls, and underground stations. The random urban sounds that he hears are first transmitted to the headphones without modification, but then the computer programme begins to create an artificial sonic environment from the sounds that it picks up.

Three different types of software feed the headphones with digitally manipulated sounds. In one instance, the ambient sounds are delayed to different degrees, decoupling the visual and the auditory perception of the surrounding space. Then the sounds are cut up and recomposed into a mosaic with a new chronological order. Finally, the sounds are made to repeat themselves and overlap with each other. In each case, the sonic ambience and the space in which the sounds were formed in the past are being remixed in the present.” From Machine Times

Akitsugu Maebayashi (1965) is a Japanese born artist who locates a new sense of reality and consciousness in the act of communication by expanding ones perceptions. His works constantly trigger the communication between the user and the other. His interest in music and musical instruments also provided him with a method for representing time and space. Maebayashi’s work has been exhibited and performed worldwide off-line (Tokyo Design Center, ICC) as well as on-line (Live on-line concert series with Chino Shuichi and others). [via WMMNA] 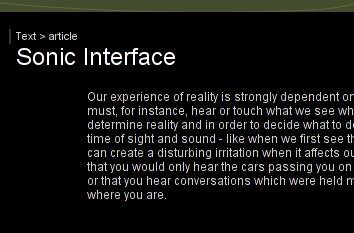