Literal:
Sonic Bed_Shanghai is a purpose built portable venue that plays new music which moves for the prone bodies of an audience, who can come lie in the bed alone or together.

Sonic Bed_Shanghai is a sonic and social experiment exploring our perception of sound. It presents an oversized king-size bed which looks much like a large wooden tank with steps to climb up to get in it. Visitors are invited to remove their shoes and come lie in and enjoy the specially constructed composition vibrating through and moving up, down and around them as they lie. Subtle, dynamic, at times beyond hearing, Sonic Bed_Shanghai plays music to feel rather than just listen to. Image:Man-boy.jpg

Sonic Bed_Shanghai is the first in a world wide series of sonic beds designed and composed for by Kaffe Matthews. The original version, Sonic Bed_London (2005), was commissioned, built and exhibited in London since when the project to build 12 localized beds in 12 different countries around the world was conceived. Each of these worldwide beds will use the same design as the original London version, but be built locally with a new sound work being made by Matthews using site specific sound material of that country.

Sonic Bed_Shanghai is an instrument, to be used by anyone who is interested as well as commissioned composers to make pieces for it. To create this music, a specially developed software interface has been built and is being developed through the Music for Bodies research(www.musicforbodies.net), through which the maker can draw and record sounds through the space of the speakers built into the bed’s frame and beneath the mattress. Sonic Bed contains a 12 channel sound system, meaning that 12 independant sources of sound can be playing and moving independantly at any one time.

The sound work playing in Sonic Bed_Shanghai was made by Matthews using sounds recorded in and around the Bund and the Wuangpu river during field visits in December and February 2005-2006.

Sonic Bed is a unique art work conceived and directed by Kaffe Matthews 2002 and realised in November 2005. Any person wishing to use or copy this work please contact annetteworks@stalk.net. Thankyou. 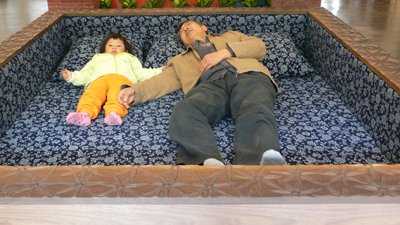