LITERAL:
Welcome to the Eighth Annual RESFEST Digital Film Festival! Get ready to enjoy our biggest festival yet, with programs that include short films, music videos, motion design, live music, guest speakers and much more. In the next four months, the festival will take place in 33 cities in 13 countries on six continents. It is the largest festival of its kind.

Each year we travel the globe and watch thousands of films in search of outstanding works to program. In reviewing this year’s 1,500 submissions, we found many works that reflect our strange and uncertain times. In light of that, we’ve put together a special shorts program, Bushwhacked!, highlighting filmmakers’ responses to the political climate in advance of this year’s US presidential election.

For this year’s festival identity, who better to represent RESFEST’s international reach than kozyndan, the LA-based illustrators whose whimsical panoramic illustrations of cities around the world (often under siege by monsters, SARS viruses and bunnies) portray their simultaneous unease with and love of the modern world. We turned to the acclaimed studio Motion Theory to – literally – bring this year’s identity to life for our festival opener. It is a work of art in its own right, rivaling this year’s short films in its inventiveness […] 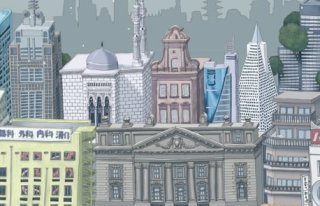