SYNOPSIS
THE CORPORATION explores the nature and spectacular rise of the dominant institution of our time. Footage from pop culture, advertising, TV news, and corporate propaganda, illuminates the corporation’s grip on our lives. Taking its legal status as a “person” to its logical conclusion, the film puts the corporation on the psychiatrist’s couch to ask “What kind of person is it?” Provoking, witty, sweepingly informative, The Corporation includes forty interviews with corporate insiders and critics – including Milton Friedman, Noam Chomsky, Naomi Klein, and Michael Moore – plus true confessions, case studies and strategies for change.

Winner of 24 INTERNATIONAL AWARDS, 10 of them AUDIENCE CHOICE AWARDS including the AUDIENCE AWARD for DOCUMENTARY in WORLD CINEMA at the 2004 SUNDANCE FILM FESTIVAL. The long-awaited DVD, available now in Australia and coming in March to North America, contains over 8 hour of additional footage.

The film is based on the book The Corporation: The Pathological Pursuit of Profit and Power by Joel Bakan. 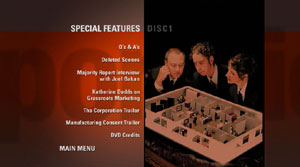