Fluxus allows you to write Scheme scripts that create graphics live, interpreting audio and OSC input as a source of animation data. Fluxus also uses a fully featured physics library, which means you can script physical properties into objects and simulate them in realtime. Released for Linux under the GPL licence. 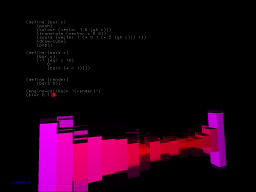