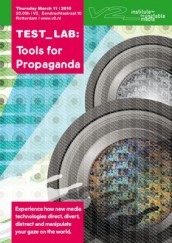 The increased accessibility and affordability of contemporary media technologies has greatly expanded possibilities for the dissemination of independent and grassroots information. At the same time, these developments have also greatly increased the opportunities for (mis)use of media technologies as powerful and effective tools for political and commercial propaganda. Although many theorists, artists, and activists have addressed the latter perspective on contemporary media technologies, critical debates have rarely relied on concrete demonstrations to prove their point. This edition of Test_Lab will therefore investigate the face of propaganda in the digital age by means of live artistic demonstrations, and will allow the audience to test hands-on how new media technologies can be applied as effective tools for propaganda.

How does Google determine which website shows up first and which one on page 2.480.133 of a search? Does a photograph only represent its own reality? How does social tagging affect the meaning of an online image? Why is spam persuasive and profitable? Is Uncyclopedia perhaps the true Wikipedia? What would the world look like if all advertisements were covered with artworks? And can Google’s Street View be a stage for artistic intervention?

Test_Lab: Tools for Propaganda allows you to experience and test for yourself how new media technologies can be (mis)used to direct, divert, distract and manipulate your gaze on the world.