Audium is the only theatre of its kind in the world, pioneering the exploration of space in music. The theatre’s 169 speakers bathe listeners in sounds that move past, over, and under them. “Sound sculptures” are performed in darkness in the 49-seat theatre.

Vision
When the concept of AUDIUM began taking shape in the late 1950’s, space was a largely unexplored dimension in music composition. The composer who suspected space capable of revealing a new musical vocabulary found his pursuit blocked by the inadequacy of audio technology and performance spaces.

Because of an unusual combination of art and technology — AUDIUM’s creators, composer Stan Shaff and equipment designer Doug McEachern, were both professional musicians — AUDIUM’s conception and realization were able to evolve jointly. AUDIUM is the only theatre anywhere constructed specifically for sound movement, utilizing the entire environment as a compositional tool. 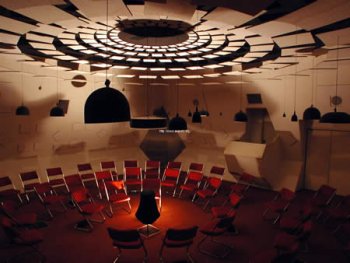