He suggested that 1,000,000 years ago, there was no art. But one day, on the 17th of January to be precise, Art was born. According to Filliou, it happened when someone dropped a dry sponge into a bucket of water. Modest beginnings, but look at us now.

Filliou proposed a public holiday to celebrate the presence of art in our lives. In recent years, the idea has been taken up by a loose network of artists and friends around the world.

Each year the Eternal Network evolves to include new partners – working with the ideas of exchange and telecommunications-art.

reverie is a virtual urban landscape (on the Web). Inside this city, an ever-expanding group of international sound artists will build venues for their work. Reverie imagines an urban landscape that includes a variety of poetic extrapolations on the types of regions that exist in our cities – a merging of Sunset Boulevard, Lower Manhattan, boat houses on the canal, the Surrey Landfill site, and a public botanical garden of the future. The web interface for the project consists of an abstracted grid. The contributing artists will locate themselves within the grid and define the characteristics of their environment and sound venue. Over time, the growing collection of audio art venues will define a structure of neighbourhoods and communities in which artists plan time-based events and engage other inhabitants in collaboration and exchange. […]

The project also refers to William Gibson’s “Walled City” and other non-fictional on-line virtual communities (MUDs, chat groups, networked gaming groups, BLOGS, etc.). “Walled City” exists as a distributed network game that requires continuous human interaction to keep it alive and functioning. The players adopt a persona and take responsibility for maintaining different parts of the city. These parts are then passed from player to player as the participants log-in and out of the game. In a similar fashion, Reverie imagines a city that is activated purely through the ongoing activities and exchanges of sound-artists. […]

There will be an Exchange-Art Festival between all of the artists in the virtual city from Friday, January 14th to Monday, January 17th 2005. This will include on-site performances, concerts, radio-broadcasts and generative audio installations at Western Front, Studio XX, Radio Kinesonus, Kunstradio and other locations around the world. A catalogue and audio CD documenting the project will be released in April 2005. 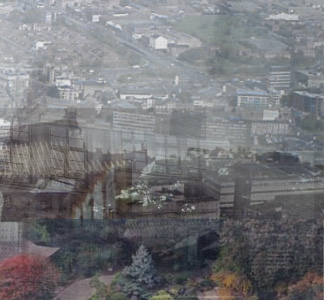