“It’s like something from a horror film,” says Vera Schlindwein, a geophysicist at the Alfred Wegener Institute for Polar and Marine Research in Germany. The songs can vary, from resembling bees buzzing to something more melodic, like a string orchestra, she says.

Unlike singing sand dunes – which can be as loud as low-flying aircraft – these iceberg emissions are not audible to human ears, but can be listened to when recordings of the seismic noise are sped up. Listen to an example, here.

Schlindwein and her colleagues were focusing on earthquakes when they first discovered the strange signals. “Earthquake signals are distinct – they begin with a bang as the ground ruptures and then slowly tail off,” explains Schlindwein. “But here the signal was shaped like a comb, with regular peaks.”

This meant that the original source was oscillating regularly. Schlindwein had seen almost identical signals from volcanic tremors, but that could not explain the pattern here because this source appeared to be on the move around Antarctica.
Water music

One spectacular signal in July 2000 helped pinpoint the cause – it was preceded by two earthquakes and lasted 16 hours. Tracing the quakes’ epicentres to a 400 metre-high iceberg, the group had found their “singer”.

Schlindwein believes that the iceberg tremors are caused by water flowing through crevasses inside it. This flow occurs when an iceberg bangs against the sea floor and slows down.

The water inside keeps moving and the high pressure of the water rushing through the tunnels sets their walls vibrating, producing regularly spaced tremors. A similar mechanism could explain the signals from volcanoes, Schlindwein suggests. 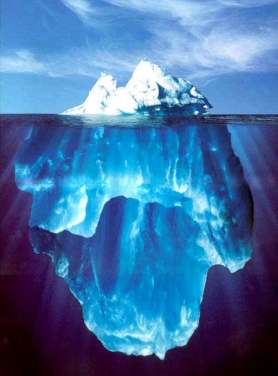