“Schott Music mourns for György Ligeti
On Monday morning, the Austrian-Hungarian composer György Ligeti died in Vienna at the age of 83 after suffering from a serious illness. With him, we have lost one of the greatest composers of the 20th century.

György Ligeti was an adventurer in form and expression and a great visionary of contemporary music. His richly varied output takes a special position in its musical quality and uncompromising individuality. Ligeti moved far away from aesthetic trends and methods all his life. He was characterized by fresh and unorthodox ideas, any form of dogmatism was foreign to his nature, his entire oeuvre is marked by radical turning points. Admired and hugely influential in the profession, the sensual accessibility of his music has won the hearts of audiences everywhere.

Atmosphères, the orchestral work he created in 1961, made Ligeti instantly well-known. In this piece, he worked almost completely without traditional melodic, harmonic and rhythmic parameters and concentrated on sounds with constantly changing textures. ‘Micropolyphony’, he once described, ‘means such a dense tissue that the individual parts become inaudible and only the resulting intermingling harmonies are effective as a form’. For him, however, techniques were never an end in themselves. Ligeti did not keep long to iridescent tonal surfaces, but always looked for new paths.

His father and brother both died in concentration camps; he himself managed to escape the labour service of the Hungarian army in 1941 and had to flee to Austria after the Hungarian Revolution of 1956. Deeply affected by these events, he developed a strong dislike of any dictatorship and any form of intellectual restriction: ‘I am an enemy of ideologies in the arts. Totalitarian regimes do not like dissonances.’ Biochemistry, chaos research, fractal geometry – Ligeti, who initially intended to study physics, found inspiration in the natural world for new compositional principles. During his long years as a teacher of international repute, he encouraged the independence, originality and uncompromising self-criticism of his pupils: ‘There is only one tradition. Our music either stands up to it or not.’

After his intensive work at the Studio für elektronische Musik of the WDR in Cologne in the 1950s and the development of micropolyphony in the 1960s, his personal style became simpler and more transparent in the 1970s. And as if wanting to withdraw from the predominating musical tendencies, he began to use tonal sounds again. Ligeti said: ‘I no longer listen to rules on what is to be regarded as modern and what as old-fashioned.’ His only full-length stage work Le Grand Macabre was inspired by the theatre of the absurd and is teeming with operetta-like wit and black humour. The composer wanted to communicate more directly with audiences: ‘Stage action and music should be dangerous and bizarre, absolutely exaggerated, absolutely crazy.’

In the 1980s and 1990s, Ligeti expanded his musical horizons again, incorporating structural principles of African drumming music into his works: the fanatic of the intricate developed new complex polyrhythmic techniques. They form the basis of the 3 collections of his Études pour piano which are considered to be the most important piano music of the end of the 20th century.

György Ligeti travelled a long road: from Romanian folk music and the tonal language of his fellow countryman Béla Bartók to his own cosmos of sounds. The mentor of a whole generation of composers, he wanted to ‘fuse the fear of death with laughter”. 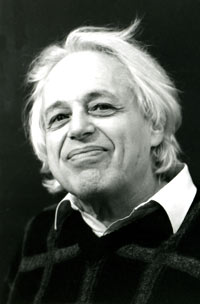