KONONO N°1 was founded over 25 years ago by Mingiedi, a virtuoso of the likembé (a traditional instrument sometimes called “sanza” or “thumb piano”, consisting of metal rods attached to a resonator). The band’s line-up includes three electric likembés (bass, medium and treble), equipped with hand-made microphones built from magnets salvaged from old car parts, and plugged into amplifiers. There’s also a rhythm section which uses traditional as well as makeshift percussion (pans, pots and car parts), three singers, three dancers and a sound system featuring these famous megaphones.

The musicians come from an area which sits right across the border between Congo and Angola. Their repertoire draws largely on Bazombo trance music, but they’ve had to incorporate the originally-unwanted distorsions of their sound system. This has made them develop a unique style which, from a sonic viewpoint, has accidentally connected them with the aesthetics of the most experimental forms of rock and electronic music, as much through their sounds than through their sheer volume (they play in front of a wall of speakers) and their merciless grooves. 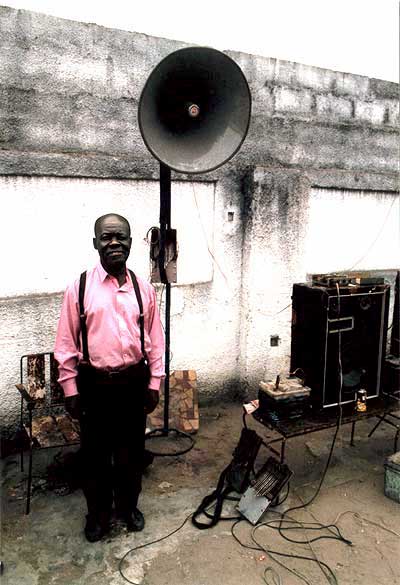