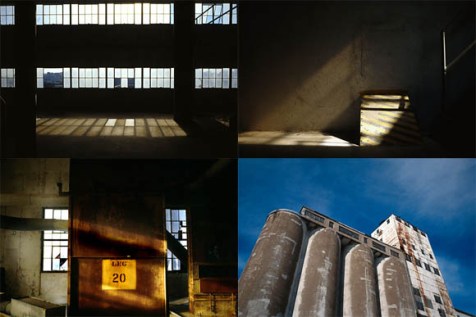 the Silo #5 grain elevator is an abandoned grain storage facility in the port of Montréal. A quarter of a mile long and over twenty storeys high, it has a total capacity of five million bushels, or enough wheat to make 230 million loaves of bread. The building was constructed in several stages between 1903 and 1958. The newest part of the building was designed to last for generations, however due to changes in the global grain market and to the general trend of de-industrialization in North America at the end of the 20th century, the building became redundant less than forty years after its completion. Since 1994, Silo #5 has stood empty, and its fate has been hotly debated.

Silophone is a project by [The User] which combines sound, architecture, and communication technologies to transform a significant landmark in the industrial cityscape of Montréal.

Silophone makes use of the incredible acoustics of Silo #5 by introducing sounds, collected from around the world using various communication technologies, into a physical space to create an instrument which blurs the boundaries between music, architecture and net art. Sounds arrive inside Silo #5 by telephone or internet. They are then broadcast into the vast concrete grain storage chambers inside the Silo. They are transformed, reverberated, and coloured by the remarkable acoustics of the structure, yielding a stunningly beautiful echo. This sound is captured by microphones and rebroadcast back to its sender, to other listeners and to a sound installation outside the building. Anyone may contribute material of their own, filling the instrument with increasingly varied sounds.

This project takes cues from transformations of similarly imposing industrial sites in Europe such as La Fonderie in Brussels, Belgium and Emscher Park in Germany’s Ruhr, both of which reactivate abandoned sites by appropriating the mandates of existing cultural programs in their surrounding communities. The Silophone project aims to raise popular awareness of the building and to catalyse activity that will eventually result in the discovery of an appropriate new function for the abandoned elevator.

To play sounds into the Silo, make a selection from the list and then press the “play” button.

If you want to play other sounds into the Silo, you must first add them to the list below using “upload”. Press the “upload” button and then choose a soundfile from your computer. Sounds uploaded onto this site will be added to the list.