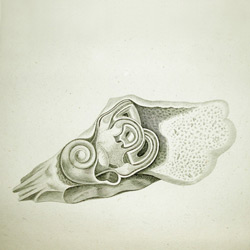 Sound + Space is a curated series of audio work that explores the relationship between sound and space. The series was curated for the Architectural Association Independent Radio during the spring/summer of 2009.

Headphones are the norm. The new addiction replacing smoking, headphones frame the head and the perception of most urbanites today in some form or other. Whether commuting with an iPod, exercising to the radio, talking on a hands-free cellphone… or actually listening to music, headphones create a mobile and continually changing architecture that follows the listener, wrapping them in a private bubble. As the world rapidly interfaces, overlaps and confronts the boundaries of Private and Public through technologies and legislation, headphones become a quiet and invisible site of investigation. The audio tracks in this collection attempt to define a body of work that is fundamentally connected to the phenomenon of headphone listening. Some work was made specifically for headphones such as Bernhard Leitner or Janet Cardiff, other work was not originally composed for headphones, but when played over headphones a unique experience of the work is created—sometimes against the original intention of the artist or at least as a surprising by-product. While the most common thread between the works is the unique spatialisation of headphones, other attributes of headphone listening—such as intimacy and privacy—are also explored and included.