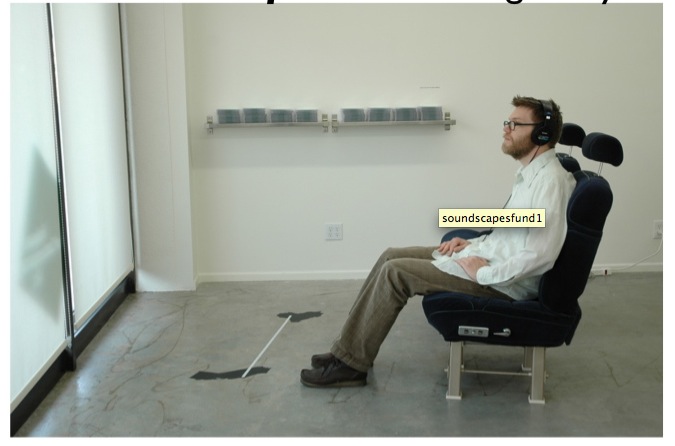 Soundscapes is the first in g727’s efforts to support the incubation and development of site-specific projects through its pilot community resource initiative called the Map and Model Shop located in the upstairs loft of g727. Soundscapes features new and existing work by Camilo Ontiveros, Felipe Zuñiga, Giacomo Castagnola, and Nina Waisman as CUBO; Ari Kletzky with Sarah Roberts and Gerhard Schultz; Elana Mann; Carla Herrera-Prats; and Christina Ulke with Sara Harris.

Soundscapes invites eleven Los Angeles and Tijuana-based artists to demonstrate the various ways of listening to place and the overlaps of history and personal memory. If sight is our primary sense, then through what other registers do we come to know things? The artists in Soundscapes respond to this question by investigating how information about our surroundings is received and understood. Through field recordings, experimental music, archived oral histories and site-generated public projects, the work featured in Soundscapes considers how urban situations are experienced and remembered through sound.

Camilo Ontiveros, Felipe Zuñiga, Giacomo Castagñola, and Nina Waisman (CUBO) present an interactive architectural and sound installation that responds to the rise in violence in Tijuana and the sensational media representation around it. Ari Kletzky extends his Islands of LA National Park project and collaborates with artist Sarah Roberts and composer Gerhard Schultz to produce a series of sound-based public projects. Carla Herrera-Prats presents Como Un Cerillo, a mural and sound installation that juxtaposes a text written by historian Alfonso Hernández with four songs that refer to the life of Tepito, a neighborhood in Mexico City that has served as a site of contention. Elana Mann’s Shifting highlights the shifting spaces between and across places, temporalities, and cultures with testimonies from twelve commuters living in both Los Angeles and Iraq. Christina Ulke with Sara Harris presents a multi-layered sonic cartography of the effects of displacement and eviction.

Soundscapes is a place-specific project centered on urban issues, and includes a series of sonorous interventions that serve as a sonic mapping of urban nodes. Conceptually, the nodes and interventions represented in Soundscapes link to regional and global concerns and mirror the overall phenomenon of urbanization. Soundscapes examines sound work as an aesthetic response to urbanization and its potential as a transgressive medium within place and geography.

About the Curator
Tiffany Barber is a Los Angeles-based curator, critic and consultant. Most recently, she has worked as a project consultant for Outpost for Contemporary Art, Santa Monica Museum of Art, and the Watts House Project. Tiffany received her Master’s degree in Public Art Studies from USC in 2008. She has been published in Beautiful/Decay, THE Magazine Los Angeles, Public Art Review and has contributed to online publications for ForYourArt and Evil Monito Magazine.