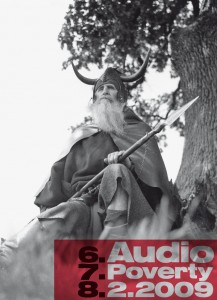 A weekend of Discussions and Lectures, Concerts and Parties, Performances and Experiments
Curators: Ekkehard Ehlers and Björn Gottstein

Music is currently undergoing a loss of value not only in economic terms, but also in ways that have an impact on the social and aesthetic structure of musical life, affecting forms of publication, the culture of listening, musical discourse, and the music itself. Music has become a commodity, delivered from all parts of the world. Audio Poverty will explore the consequences of these changes: what is the relationship of the musician to the disappearing market? What is the significance of the individuation of listening for music’s social importance? What does it mean when the music critic is silent? And does musical poverty have a sound? Audio Poverty explores the link between music and poverty, from impoverished musical material to the starving artist. Audio Poverty crosses genres in both global and historical terms.

Audio Poverty looks at music from the margins—the sounds of the viola da gamba and a chirping Barbie doll, between broken vinyl and Africa’s acoustic everyday life, between Philippine art music and Detroit trash. The concert hall and the club are given equal status in a musical discourse where poverty becomes musically concrete.

The program thus includes such different formations as the arte povera of the avant-garde, Game Boy pop, folksy-Schumann interpretations by Josephine Foster, the style-crossing and transcontinental world music of the New York “bass visionary” DJ Rupture, the noise excesses of the US border crossers Hair Police, and the exuberant misappropriation of Birmingham’s Modified Toy Orchestra. Five musicians from Berlin, Vienna, and Innsbruck will undertake an extraordinary project, fasting and meditating for four days in a Buddhist cloister, then improvising together in a state of mental and physical emptiness. Audio Poverty will be accompanied by sound installations, performances, and DJ sets.

At the center point of the debates is confrontation: we have invited to the podium record label executives, journalists, academics, and musicians. Lobbyists face up to subculture. Musicology encounters World-Ghetto-Tech. DIY meets the diva. Lectures will be held on the loss of subculture, alternative aesthetic strategies, the culture of the Internet and blogs, musica povera and the dubious myth of the poor artist.