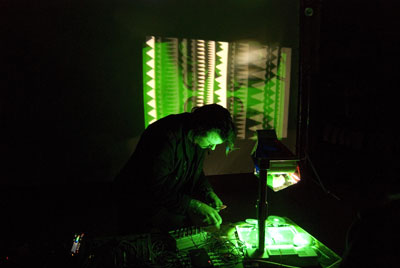 TONEWHEELS is an experiment in converting graphical imagery to sound, inspired by some of the pioneering 20th Century electronic music inventions. Transparent tonewheels with repeating patterns are spun over light-sensitive electronic circuitry to produce sound and light pulsations and textures. This all-analog set is performed entirely live without the use of computers, using only overhead projectors as light source, performance interface and audience display. In this way, TONEWHEELS aims to open up the “black box” of electronic music and video by exposing the working processes of the performance for the audience to see.

In this workshop, participants will learn about different optoelectronic components (photodiodes, photoresistors, phototransistors and photoelectric cells) and how they can be used to create sound from natural or electronic light sources in our everyday world, as well as from lasers and other modulated light sources. Circuits to drive motors in order to create hand-drawn spinning “tonewheels” will also be shown.

Derek Holzer [USA 1972] is a sound artist who has performed live audiovisual sets using laptops and the Pure Data programming language since 2001. Becoming frustrated with the performance limitations of the computer, he began new experiments with all-analog, light-driven systems in the summer of 2007 which led to the TONEWHEELS live performance. Since then, TONEWHEELS has been performed in Germany, the Netherlands, Sweden, Italy, Estonia, Poland and Belgium.