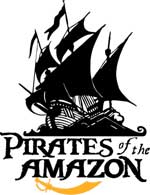 Many Nettimers might already have read about www.pirates-of-the-amazon.com. The website provided a Firefox add-on that changed the experience of browsing Amazon.com by putting a slick “Download 4 Free” button on top of every product – whether a CD, DVD or book – also listed as a bittorrent on The Pirate Bay. Clicking the button on the Amazon.com product page for, say, Madonna’s latest album would yield a background search on The Pirate Bay and start up a bittorrent client to download a corresponding torrent.

After being published this Monday, the project made headline news on digg.com and has been covered among others by CNET, the Washington Post and currently more than 1000 blog entries worldwide.

Via its provider, the project received a take down request by the lawyers of Amazon.com yesterday. In our point of view, the legal grounds for that are contestable since the add-on itself did not download anything. It only provided a user interface link between the web sites Amazon.com and thepiratebay.org. Nevertheless, the creators complied to the request, taking both the add-on and original web site offline.

What is perhaps more disturbing however, are the openly hostile and aggressive Internet user comments in blogs and on digg.com. Unlike in a
comparable situation only a couple of years ago, the majority of commentators failed to see the highly parodistic and artistic nature of “Pirates of the Amazon”. The project was created by two students at the Media Design M.A. department of the Piet Zwart Institute Rotterdam, one of them being a student in the course, the other being an exchange student from the New Media programme of Merz Akademie Stuttgart. The work was part of a regular trimester project. We – jaromil, the project tutor, and Florian Cramer, the head of the course – were the academic supervisors of this work. We supported and encouraged it from its early beginnings. What’s more, we’re proud to have such students and such interesting work coming out of our teaching.

Apart from its humorous value and cleverness, the project is interesting on many levels and layers: For example, not just as a funny artistic hack of Amazon.com and The Pirate Bay, but also as a critique of mainstream media consumer culture creating the great “content” overlap between the two sites. We clearly see this project as a practical media experiment and artistic design investigation into the status of media creation, distribution and consumption on the Internet.

With the take down notice from Amazon.com, our students have been scared away from pursuing their art, research and learning in our institute. We do not want a culture in which students have to preemptively censor their study because their work confronts culture with controversial and challenging issues.

We would like to gather statements in support of the “Pirates of the Amazon”. The students are turning their web sites into a documentation of their project and the reactions it triggered. If you would like to support them and contribute a short statement, please get in touch with us.