“As an artist/composer, my intention is always polarized by concepts of ‘the beautiful and the sublime’. To me, beauty is crystal; rationality, precision, simplicity, elegance, delicacy. The sublime is infinity; infinitesimal, immensity, indescribable, ineffable. The purest beauty is the world of mathematics. Its perfect assemblage amongst numbers, magnitudes and forms persist despite us. The aesthetic experience of the sublime in mathematics is awe-inspiring. It is similar to the experience we have when we confront the vast magnitude of the universe, which always leaves us open-mouthed. The aim of this project is to engage in dialogue with the mathematician Benedict Gross and other number theorists to find a common language on aesthetics.”
Ryoji Ikeda

“When you discover a mathematical truth, everything immediately becomes clear. It’s so easy to understand. You don’t want to touch it. The beauty of mathematics is just a pleasure to behold.”
Benedict Gross

Ikeda’s first major exhibition in France includes three new works by the artist commissioned for the opening of Le Laboratoire.

Le Laboratoire is a dynamic new space in the centre of Paris which allows pioneering artists and scientists to collaborate and create new forms of art and design around a central theme. Ikeda has taken as a basis for these new works a conversation with Harvard professor of mathematics and eminent number theorist, Benedict Gross.

In set theory, V denotes the von Neumann universe and L denotes Godel’s constructible universe. Their equality or inequality is a disputed point, and the position one chooses to take on whether V=L or V?L reveals a great deal about one’s philosophy of mathematics. If V?L then not every set of numbers is constructible. The removal of this restriction allows for the inclusion of numbers that are almost beyond the limits of human comprehension. More than just a mathematical equation, this expression inspires contemplation of that which we cannot perceive, which can lead to a transcendent experience of the sublime.

The exhibition at Le Laboratoire is part of the Festival d’Automne programme. 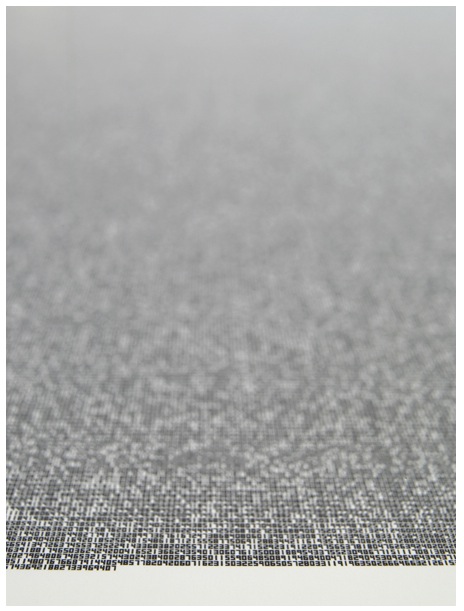