Our music, our culture, our science, and our economic welfare all depend on a delicate balance between those ideas that are controlled and those that are free, between intellectual property and the public domain. In The Public Domain: Enclosing the Commons of the Mind James Boyle introduces readers to the idea of the public domain and describes how it is being tragically eroded by our current copyright, patent, and trademark laws. In a series of fascinating case studies, Boyle explains why gene sequences, basic business ideas and pairs of musical notes are now owned, why jazz might be illegal if it were invented today, why most of 20th century culture is legally unavailable to us, and why today’s policies would probably have smothered the World Wide Web at its inception. Appropriately given its theme, the book will be sold commercially but also made available online for free under a Creative Commons license.

Boyle’s book is a clarion call. In the tradition of the environmental movement, which first invented and then sought to protect something called “the environment,” Boyle hopes that we can first understand and then protect the public domain – the ecological center of the “information environment.”

With a clear analysis of issues ranging from Thomas Jefferson’s philosophy of innovation to musical sampling, from Internet file sharing and genetic engineering to patented peanut butter sandwiches, this articulate and charming book brings a positive new perspective to important cultural and legal debates, including what Boyle calls the “range wars of the information age”: today’s heated battles over intellectual property. Intellectual property rights have been viewed as geeky, technical and inaccessible. Boyle shows that, as a culture, we can no longer afford the luxury of this kind of willed ignorance. The “enclosure of the commons of the mind” matters and it matters to all of us. “Boyle has been the godfather of the Free Culture Movement since his extraordinary book, Shamans, Software, and Spleens set the framework for the field a decade ago,” says Lawrence Lessig, “In this beautifully written and subtly argued book, Boyle has succeeded in resetting that framework, and beginning the work in the next stage of this field. The Public Domain is absolutely crucial to understanding where the debate has been, and where it will go. And Boyle’s work continues to be at the center of that debate.” 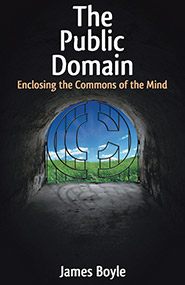