The Bloop, from the NOAA website at 16x the original speed
[audio:http://upload.wikimedia.org/wikipedia/commons/2/25/Bloop.ogg]

The Bloop is the name given to an ultra-low frequency underwater sound detected by the U.S. National Oceanic and Atmospheric Administration several times during the summer of 1997. The source of the sound remains unknown.

The sound, traced to somewhere around 50º S 100º W (South American southwest coast), was detected repeatedly by the Equatorial Pacific Ocean autonomous hydrophone array, which uses U.S. Navy equipment originally designed to detect Soviet submarines. According to the NOAA description, it “rises rapidly in frequency over about one minute and was of sufficient amplitude to be heard on multiple sensors, at a range of over 5,000 km.” According to scientists who have studied the phenomenon it matches the audio profile of a living creature but there is no known animal that could have produced the sound. If it is an animal, it would have to be, reportedly, much larger than even a Blue Whale, the largest known animal on the earth. 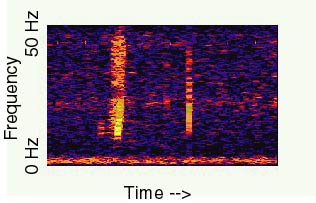