This Retrospective features over 100 pieces of music and sound effects from various BBC TV and Radio shows from 1958 through to 1997. Including work from Quatermass and the Pit, The Goon Show, The Secret War, Blake’s Seven, The Hitchhiker’s Guide to the Galaxy, Salem’s Lot, The Demon Headmaster, Michael Palin’s Full Circle as well as the original full length Dr Who Theme and the Tardis effects.

Using reel-to-reel tape machines, early heroines such as Daphne Oram and Delia Derbyshire recorded everyday or strange sounds and then manipulated these by speeding up, slowing down or cutting the tape with razor blades and piecing it back together.

The pioneering techniques were created for and used on a myriad of programmes, with Dr Who being their biggest client. The sound of the Tardis in Dr Who was a sound engineer’s front door key scraped across the bass strings on a broken piano. Other impromptu props included a lampshade, champagne corks and assorted cutlery.

Ten years ago the workshop was disbanded due to costs but its reputation as a Heath Robinson-style, pioneering force in sound is as strong as ever, acknowledged as possibly the greatest influence on UK electronic music, influencing the likes of Jon Spencer, Aphex Twin, Daniel Miller, Add N to (X)… The corporation initially only offered its founders a six-month contract, because it feared any longer in the throes of such creative and experimental exercises might make them ill.

These releases continue a series that began on The Grey Area of Mute with the release of Doctor Who at the BBC Radiophonic Workshop Volume 1: The Early Years 1963-1969 and Volume 2: New Beginnings 1970-1980. 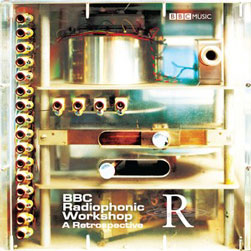