Experimental musical scores are considered as works of visual art in Perspectives 163: Every Sound You Can Imagine. This group exhibition samples the wide array of notational strategies and explores the cross-fertilization between musicians and visual artists, revealing the vital connections between experimental sound art and cutting-edge visual art.

In the late 1940s, European music experienced a crisis of representation. The system of staff notation that, since the Renaissance, had served to fix musical works and to uniquely determine their performance began to give way to new compositional strategies that dispensed with the musical staff and, instead, populated the page with idiosyncratic symbols, diagrams, and written instructions. Such compositions were, in part, a response to electronic instruments that could record or produce not merely the twelve pitches of the European scale but what artist John Cage called “the entire field of sound.” They also revealed the influence of jazz, a renewed interest in improvisation, and the desire to dissolve the hierarchy between composer and performer. In the process, the bond between the visual score and the sounding substance of music was loosened, and the score achieved the status of an independent visual art.

Every Sound You Can Imagine traces these developments, from the first wave of experimental notation in the 1950s through its resurgence in the late 1990s, when musical notation sprang off the page and into video, photography, sculpture, and new media. The exhibition is guest curated by Christoph Cox in association with Toby Kamps, senior curator at the Contemporary Arts Museum Houston, and collector Robert Shimshak. 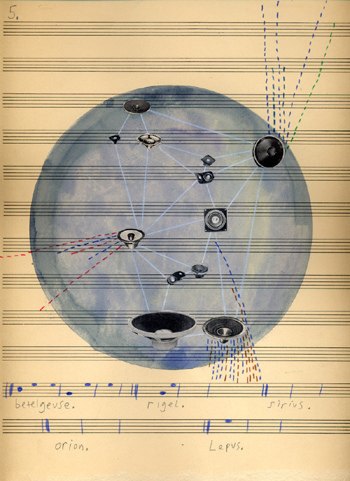