Delia Derbyshire was born in Coventry in 1937, studied at Barr’s Hill school, and went on to a degree in maths and music at Girton College, Cambridge. By 1963 she had become one of the most extraordinary composer-producers at that bunker of strange sounds known as the BBC Radiophonic Workshop, where experiments with tape-splicing and oscillators warped the minds of a generation of young viewers and listeners. Since her death in 2001 Derbyshire’s influence has been acknowledged by an army of contemporary musicians and artists, but in her hometown there is barely a trace of her.

As part of the A Thing About Machines festival, 7 Inch Cinema will be helping to rectify that with a day of screenings and performances at a nice little venue tucked away in the city centre. As well as a selection of archive footage and documentaries covering the full span of Derbyshire’s work (not just the Doctor Who theme!), live/reel-to-reel guests will include members of Pram (Domino records) and Brian Duffy (Modified Toy Orchestra) – who will be bringing along the same model of lampshade as that used on the haunting ‘Blue Veils and Golden Sands’ (picture left courtesy of Jonny Greenpeace). We climax around 7.30pm with a showing of cult 1973 horror The Legend of Hell House, featuring a score by Derbyshire and regular collaborator Brian Hodgson. 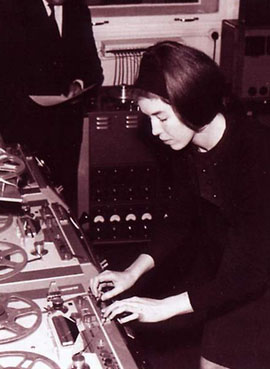