WAVE PHASES
A sound re-creation of a beach in the Temple of Debod is the proposition by artist Bill Fontana for La noche en blanco. Born in Cleveland (USA) in 1947, Fontana is known internationally for his pioneering experiments in sound sculpture and art, which has led him to show his works on international stages. He will be the mastermind behind the miracle that for just a few hours Madrid residents will be able to enjoy the sea they’ve never had. Bill Fontana got his start in the mid-1970s, when digital technology did not yet exist. This gap led him to experiment with aesthetic ideas about the musicality of nature and our environment. Thus began his work on sound sculptures, as he gathered the sounds of cities, animals, the sea, etc. He has participated in the Venice Biennale, and his works have been displayed at venues such as the Tate Modern. Some of his installations are part of the permanent collections at San Francisco’s MoMA, while others are located in metropolitan areas, such as Cologne. He has taught classes at the California College of Arts and Crafts, at the San Francisco Art Institute and at Paris’ Sorbonne University. He also has an extensive number of recordings – Harmonic Bridge, Sonic Landscaping, Sounds of the British Coast and Sounds of the Old City of Jerusalem. 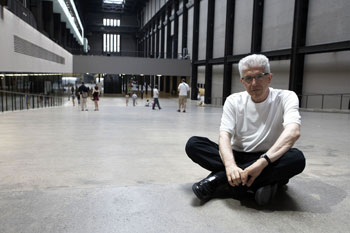