The exhibition “Hearing Listening“ introduces the Austrian composer Peter Ablinger for the first time in an artistic context and offers insight into his complete works from 1992 to 2008. His works will be accompanied by several paintings by Leipzig born Daniel Biesold who lives in Berlin. The work of Peter Ablinger born in 1959 deals with the relationship of the sound event and its interface between mimesis and noise. The spatial context refers to listening in the sense of acoustic photography. Visitors encounter speaking pianos, the roaring of artificial waterfalls, snail houses tuned to E-major as well as the (un-)acute differences between the sounds of nature and those of civilization.

Outside the house, acoustic pieces from the cycle “WEISS/WEISSLICH“ (White/Whitish) created in the mid-90s will be heard. Wearing headphones with built-in microphones, visitors will acoustically experience their environment in a new way. They can take seats on the open terrace like at a concert and listen to the sounds of daily life that so typically go unheard: traffic from the street, birds, language, machines. Stringing the sounds together “sound photographs” are created. However, it quickly becomes very clear that just hearing part of a sound in nature is harder to classify than a visual detail in a photograph. The auditory awareness is not trained sufficiently to register these impressions.

In the interior of the Haus am Waldsee the themes of sound, the perception of space, and language are resumed and further condensed. Ablinger spectacularly conjures up the spirit of Arnold Schönberg’s voice with a computer operated piano. On the top floor of the house visitors are also actively drawn into a sound installation. The tour will bring about a new awareness to the listening experience generally absent from our consciousness.

In this exhibition, the composer’s work meets the white paintings by Daniel Biesold. Born in Leipzig in 1964, Biesold studied in Hamburg and Frankfurt. Just like Ablinger, Biesold is a fervent admirer of the minimalist painter Agnes Martin (1912-2004). Both name the great American as a decisive point of reference for their work. The exhibition becomes an experiment consisting of the encounter of the visual composer and the acoustic painter. 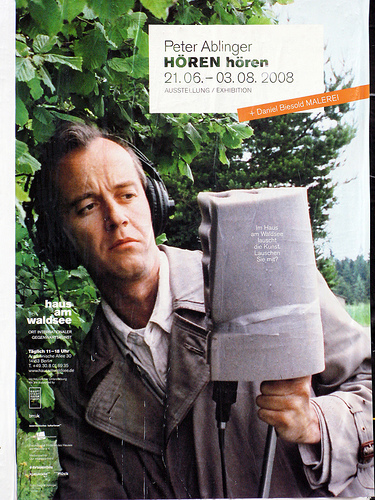