CAIRO — Egyptians in this capital city say it is harder and harder to be heard and to have a voice, but they are not talking politics. Well, not only politics.

What they are talking about, or rather yelling about, is noise, the incredible background noise of a city crammed with 18 million people, and millions of drivers who always have one hand on the horn and a rules-free way of thinking.

“Whenever I talk to people, they always say, ‘Why are you screaming?’ ” said Salah Abdul Hamid, 56, a barber whose two-chair shop is on the corner of a busy street on the north side.

Mr. Hamid was, of course, screaming.

It was 4 p.m. in Rhode al Farag, a typical Cairo neighborhood teeming with people and shops and cars and trucks and buses and horse-drawn carts. From his shop, the landscape of sound revealed a chorus of people struggling to make a living, trying to assert themselves in a city, and in a country, where they often feel invisible.

Noise — outrageous, unceasing, pounding noise — is the unnerving backdrop to a tense time in Egypt, as inflation and low wages have people worried about basic survival, prompting strikes and protests. We’re not just talking typical city noise, but what scientists here say is more like living inside a factory.

“It’s not enough to make you crazy, but it is very tiring,” said Essam Muhammad Hussein, as he sat in a cracked plastic chair outside the corner food shop his family has owned for 50 years. He was shouting as he talked about the noise, though he did not seem to realize it.

This is not like London or New York, or even Tehran, another car-clogged Middle Eastern capital. It is literally like living day in and day out with a lawn mower running next to your head, according to scientists with the National Research Center. They spent five years studying noise levels across the city and concluded in a report issued this year that the average noise from 7 a.m. to 10 p.m. is 85 decibels, a bit louder than a freight train 15 feet away, said Mustafa el Sayyid, an engineer who helped carry out the study.

But that 85 decibels, while “clearly unacceptable,” is only the average across the day and across the city. At other locations, it is far worse, he said. In Tahrir Square, or Ramsis Square, or the road leading to the pyramids, the noise often reaches 95 decibels, he said, which is only slightly quieter than standing next to a jackhammer. 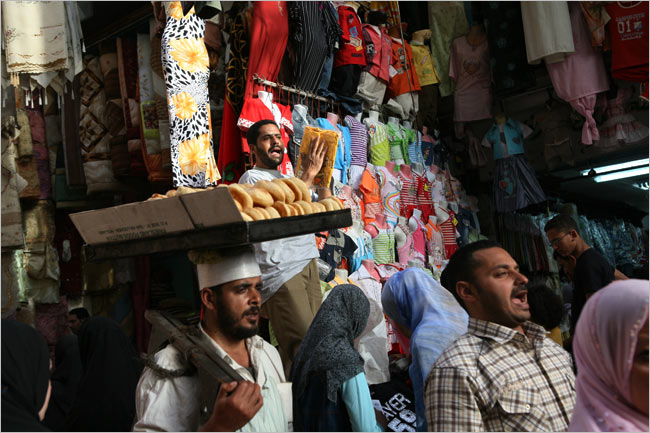 ** Salesmen shout in Cairo, where the noise is like living with a running lawn mower next to you.