“There was a surprising appearance at CIEPE, the Asia-Pacific Police Logistics and Equipment expo in Beijing last month.

Amongst the displays of high-tech police equipment was the LRAD – Long Range Acoustic Device – made by American Technology Corporation (ATC). LRAD is an ultra-high-power loudhailer that can be used for crowd control, often described by the media as a “sonic weapon”. It was famously used to drive off Somali pirates in 2005.

LRAD’s appearance seems at first surprising, since the US does not permit weapons exports to China. Public Law 101-246, passed after the Tiananmen Square massacre, makes them illegal.

But ACT are happy to say in their most recent Securities and Exhange Commission filing that:

“During fiscal 2007, we expanded our international marketing activities and shipped LRAD orders to Australia, Singapore, Korea and China”.
It turns out that Public Law 101-246 is confined to items on the State Department’s Munitions List. Only standard weapons are included – it is not far-sighted enough to include acoustic weapons or various other novel technologies.

ATC themselves are always careful to refer to LRAD as a “device” rather than a weapon. Although, in addition to being used to communicate, they boast that:

“When properly operated, [it can] provide an intense but not harmful beam of sound to warn away friendlies, classify non-compliants as hostile and support decisions concerning escalation of responses.”

LRAD produces sound levels of up to 150 decibels, enough to damage hearing and above the level that causes pain.

In the US military, LRAD deployment is overseen by the Joint Non-Lethal Weapons Directorate, who refer to it as a “tool” and “an option in the force continuum”.

Whether you think it is a weapon or not, it will be interesting to see how the US reacts if this home-grown “device” is used on protesters at the Beijing Olympics”. 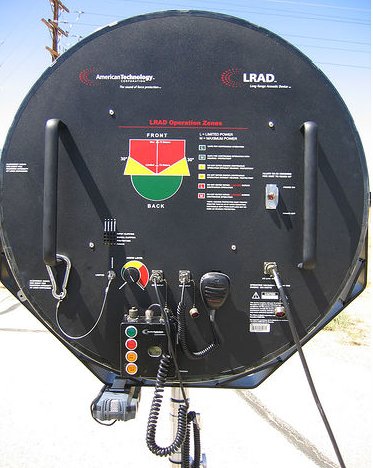