The icon, the voice

Timbre and light, the fusion of harmony and shapes, visual metaphors for an object permeating sound, Agora 2008 interweaves listening with vision and the sudden appearance of the voice as a resonant icon. Opening with L’Icône paradoxale by Gérard Grisey, a work that literally “scrutinizes” the Madonna del Parto by Piero della Francesca, the two-week period of Agora 2008 is the occasion for IRCAM to present its most recent developments in the domain of expressivity of music and speech. From Stefano Gervasoni’s new fado to the visual and theatrical “machinations” by Georges Aperghis, from Jonathan Harvey’s “spoken orchestra” to the first work by Beat Furrer that sends voices and electronics into the listening space, Agora examines the question of the voice from all angles. Be it a real presence connected to the affects of language (Com que Voz by Gervasoni), a collection of phonemes that multiply expressive misunderstandings (Aperghis), or asymptotic of the instrumental domain that approaches and imitates it (Speakings by Harvey), the voice literally haunts Agora. Agora 2008 is a festival situated at the threshold of the verb, created by the entire IRCAM team with the support of the Spectacles vivants at the Centre Pompidou, it is a festival that now accompanies its most important productions to other French and international venues.

“We are musicians and our model is sound, not literature; sound, not mathematics; sound, not theater, not art, not quantum theory, not geology, not astrology, not acupuncture.” In this founding and iconoclastic statement, Grisey proclaimed the autonomy of the musical work and its unlimited power not to “mean” anything. Agora ponders the legacy of this French composer that passed away a decade ago and remains a decisive figure for musicians from wide-ranging backgrounds, such as Georg Friedrich Haas, as well as for a new generation of artists. The aesthetics of saturation and bruitisme, extremely present in IRCAM’s new Cursus program, are a part the traces left by the composer of Quatre Chants pour franchir le seuil who considered the spectral adventure to be a genuine Renaissance. A nothingness never evacuated, similar to the “lost looks” (Yves Bonnefoy) in the mathematical constructions of Piero della Francesca, that defies the purity of the initial aesthetic intention: the almost absent in spectral music, it’s blind spot – the voice or figure – reappears in the last work by Grisey. Music as a continual, rather than a discursive development; a biased and irreversible, rather than a chronometric time imagined over a certain period that is pure and free of any subject. This oeuvre has nonetheless produced numerous visual and formal analogies that will stand the test of time. The musical icon is, in this sense, truly a “paradox”. 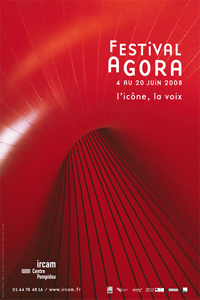