OptoSonic Tea is a regular series of meetings dedicated to the convergence of live visuals with live sound which focuses on the visual component. These presentation-and-discussion meetings aim to explore different forms of live visuals (live video, live film, live slide projection and their variations and combinations) and the different ways they can come into interaction with live audio. Each evening features two different live visual artists or groups of artists who each perform a set with the live sound artists of their choice. The presentations are followed by an informal discussion about the artists’ practices over a cup of green tea. A third artist, from previous generations of visualists or related fields, is invited specifically to participate in this discussion so as to create a dialogue between current and past practices and provide different perspectives on the present and the future.

Naval Cassidy has been an instant cinema and sound performer for over
fifteen years. Working solo, or with groups like Stackable Thumb and The
Hands of Orlak, he has been a consistent presence in New York’s live video
and performance scene. Through his special blend of video performance,
Instant Cinema, Naval pulls delirious visions out of discarded broken
objects, simply by placing each one under the watchful eye of his
surveillance cameras.

Michael Evans is an improvising drummer/percussionist/ thereminist/composer
whose work investigates and embraces the collision of sound and theatrics.
Besides being a drum set player, his work with unusual sound sources
includes found objects, homemade instruments,various digital and homemade
analog electronics. He has worked with a wide variety of artists nationally
and internationally.

Caspar Stracke is a German visual artist, based in New York City. His video
and installation works have been shown in institutions such as MoMa and The
Whitney, ZKM Karlsruhe, ICC Japan, Yerba Buena SF, Rena Sofia Madrid, among
others. He has exhibited in int¹l film and media art festivals throughout
North and South America, Europe and East Asia. Caspar occasionally performs
live video with Gabriela Monroy under the name MOSTRA and has performed with
many NY sound and performing artists such as DJ Olive, Active Phaze, David
Linton, qpe, Firehorse, Benton C-Bainbridge, and Matthew Ostrowski, among
many others. Longer collaborative projects include video design for dance
performances by Koosil-ja Hwang (DanceKumikoKimoto, 1994 -2001) film
performances with Julie Murray (Panoptical Motor, 1995-97) and video
collaborations with Terre Thaemlitz. (2002-3). He is a recipient of a
Rockefeller Media Artist Fellowship and a Bessie Award (with Benton
C-Bainbridge.)

Composer, producer, and multi-instrumentalist Hahn Rowe has lived in New
York City for over 25 years working with people/groups such as Glenn Branca,
Hugo Largo, David Byrne, Jim Thirwell/Foetus, Mimi Goese, and Antony and the
Johnsons. He is active as a composer for film and dance/theater and is
currently performing solo concerts on violin, digitally transformed in
realtime.

Carol Parkinson
An arts administrator/artist whose professional services include arts panel
participation at the New York Foundation for the Arts, the New York State
Council on the Arts, the National Endowment for the Arts and the Lower
Manhattan Cultural Council. She has been the Director of Harvestworks since
1987 and has been involved in the programming and development of the
organization since 1982. Previous to that date she was employed by the Dia
Art Foundation as assistant to composer LaMonte Young and Marian Zazeela.
During her employment at Harvestworks, she has organized panelists,
participated in the review of applications to the Harvestworks
Artist-In-Residence Program and most recently, co-produced the city-wide The
New York Electronic Art Festival. She is a founding member of TELLUS, the
experimental audio series and continues to support and distribute
experimental and innovative work in the digital media arts. Her primary
interest is in the development of experimental electronic sound art and
emerging technologies. Her educational backround includes a Bachelor of
Science in Studio Art from the University of Wisconsin at Madison with
supplementary education at Skidmore College and the Whitney Museum of Art in
New York City. As a composer she has performed at Roulette, the Kitchen and
White Columns and has done soundtracks for video artists Louis Grenier and
Julie Harrison. She has been published in Ear magazine, the Village Voice
and High Performance Magazine. Grants and awards include a NYSCA media grant
for a collaboration with video artist Julie Harrison. 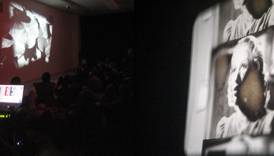