“My project is an experimental approach to creating rhythmical compositions via a tactile interface. Beatspinner v2.0 allows the user to sequence drum loops and other sound loops and then witness their playback as the interface rotates physically before their eyes. My aim was to create a prototype sound toy aimed at children and young teenagers. I wanted to create something that could be played with and explored the spatial relationship between visual & tangible triggers and basic rhythm/melody.

The interface works by placing wooden pieces on a looping disc where you wish for sounds to be triggered. There are eight potential ‘zones’ spanning the radius of the disc where individual sounds can be triggered and each zone contains eight potential trigger points in the form of small wooden pegs. Placing ‘trigger pieces’ across the disc on the pegs in different arrangements will produce different rhythmical compositions. By sending MIDI note data to Ableton Live different sounds/samples can be ‘attached’ to any of the eight zones allowing for variation of not only rhythms and melodies but timbres and sound itself. This means compositions need not necessarily be bound to traditional instrument sounds so a whole range of synthesized noises could be used and translated into processed output” 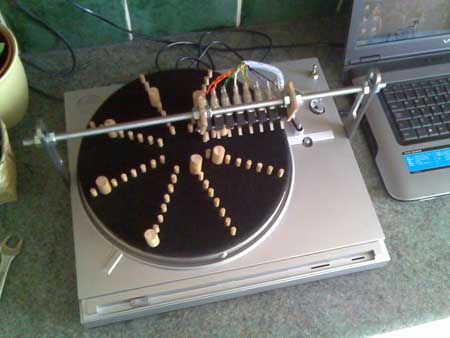