The biennial “Métamorphoses” competition of acousmatic composition is organized by Musiques & Recherches with the support of Communauté française Wallonie-Bruxelles de Belgique.

The “Métamorphoses” composition competition comprises two categories: category A for composers under the age of 28 (and students) and category B for all composers of maximum 50 years old, or students who wish to compete in this category.

1. After listening to all the works, members of the pre-selection jury meet at the end of June 2008 to listen again to the best entries and choose the 5 or 6 works from category B that will be selected for the October 2008 final and published in stereo version on CD.

This jury also determines the winner of category A, whose work will also figure on the CD.

A spatialization competition will be held during the “L’Espace du Son” festival in October 2008. The candidates will interpret a set work chosen from the works received for the “Métamorphoses” competition. The jury reserves the right to decide whether this work will be included on the CD.

2. During the final of the “Métamorphoses” composition competition, which will take place on October 16, 2008, the finalist composers who wish to do so can spatialize their work in public on the M&R acousmonium (loudspeaker orchestra). On this occasion, a jury different from the June jury will determine the ranking and announce the prizes.

Prize for category A

1st Prize: Publishing of the work on CD, diffusion in concert, and 10 copies of the CD.

Prizes for category B
1st prize: 2500 Euros.
Audience Prize: 500 Euros.
M&R prize: residence at the composition studio “Métamorphoses d’Orphée”. Publishing of the finalists’ works on CD.
5 copies of the CD for each finalist.
The stereo work selected by the pre-selection jury will be played as the set work in the spatialization competition that will take place in the context of the same “L’Espace du Son” festival.

Regulation and inscription form in PDF 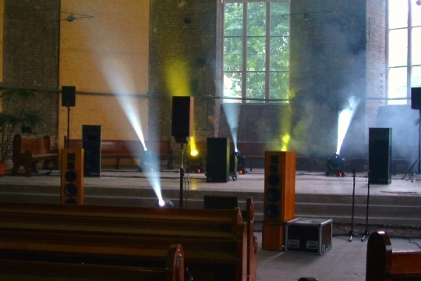