Alessandro Ludovico is a media critic and editor in chief of the highly respected Neural magazine from 1993, (Honorary Mention, Prix Ars Electronica 2004). He is the author of several essays on digital culture, he co-edited ‘Mag.Net Reader’. He’s one of the founding contributors of the Nettime community, one of the founders of the Mag.Net (Electronic Cultural Publishers)’ organization and he teaches ‘Computer Art’ and ‘Interface Aesthetics’ at the Academy of Art in Carrara.

I think that’s more than enough for a sole man.

Not for him apparently. Not only does he wear great t-shirts*, he also collaborates with UBERMORGEN and Paolo Cirio on artistic projects which have toured the world: GWEI – Google Will Eat Itself (Honorary Mention Prix Ars Electronica 2005, Rhizome Commission 2005, nomination Prix Transmediale 2006) and Amazon Noir (1st prize Stuttgarter Filmwinter 2007, Honorary Mention Share Prize 2007).

When I met him several years ago, i also realized that i had no chance of ever winning the contest for the “Nicest person in the new media art world.” Sigh! 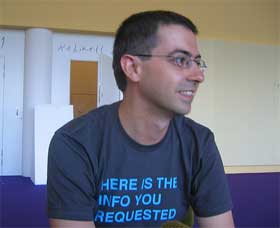