Standing silent and abandoned, a series of isolated and mysterious concrete structures line the south east coast of England. Known locally as “listening ears”, these structures, more properly called acoustic mirrors, are vestiges from great inter-war acoustic experiments to create an early warning system against the possibility of an airborne invasion across the English Channel.

The acoustic mirrors tilted their faces to the sky and collected sound in giant concrete dishes. They were operated by trained listeners that endured cold nights at their listening posts, entombed in concrete bunkers, or high on listening platforms in front of the mirrors, to pick up distant noises from the sky.

The acoustic mirrors were never used in wartime – the invention of radar and the increasing speed of aeroplanes rendered them obsolete within ten years of their erection. Almost seventy years later, these now forgotten experiments have become the focus and the inspiration for a groundbreaking international art project – an attempt to re-invent this redundant technology for the 21st Century. […]

Visitors to the mirrors will be able to climb up to a listening platform in front of the mirror, in the manner of the original listeners at the historic mirrors. Rather than straining for the sound of distant aeroplane engines, people will be listening to the sounds of the sea, as well as for voices speaking to them from across the Channel.

A new advanced acoustic technology will allow transmitted sounds from the other mirror to be audible only at a particular focal point in front of the dish – focused at the small area around the listener’s head. The person standing at the focus point will hear a complete “holographic” binaural sound image which will appear to be coming from the air all around them.

The binaural sound image will reproduce the sound in three dimensions, so that the listener will feel as if they are actually standing in the place where the voice was speaking. The transmitted sound will mix with the sounds of the sea and the Channel, which will be collected and amplified by the acoustic effects of the dish itself. […] 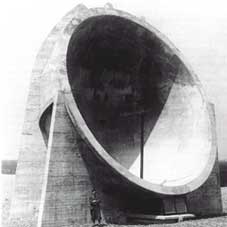