“Noise/Music looks at the phenomenon of noise in music, from experimental music of the early 20th century to the Japanese noise music and glitch electronica of today. It situates different musics in their cultural and historical context, and analyses them in terms of cultural aesthetics. Paul Hegarty argues that noise is a judgement about sound, that what was noise can become acceptable as music, and that in many ways the idea of noise is similar to the idea of the avant-garde.

While it provides an excellent historical overview, the book’s main concern is in the noise music that has emerged since the mid 1970s, whether through industrial music, punk, free jazz, or the purer noise of someone like Merzbow. The book progresses seamlessly from discussions of John Cage, Erik Satie, and Pauline Oliveros through to bands like Throbbing Gristle and the Boredoms. Sharp and erudite, and underpinned throughout by the ideas of thinkers like Adorno and Deleuze, Noise/Music is the perfect primer for anyone interested in the louder side of experimental music”
Continuum 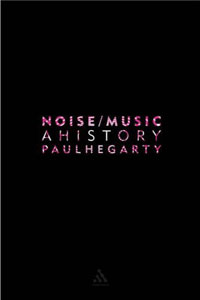