LITERAL:
“I’ve never heard anyone boo a transistor radio,” says John Cage. He’s talking with fellow composer Morton Feldman, who was just complaining about how the presence of radios playing rock’n’roll had spoiled a recent day on the beach. Cage is having none of it: “All that radio is, Marty, is making available to your ears what was already in the air and available to your ears but you couldn’t hear it. In other words, all it’s doing is making audible something you’re already in. You are bathed in radio waves, TV broadcasts.” And, Cage goes on to joke, telepathic messages from other deep thinkers, such as Feldman himself.

This is just one early highlight from a recording that’s among the many treasures in the Other Minds audio library at archive.org. Taped between 1966 and 1967, the discussion documents the minds of two of the major figures in 20th-century music. Feldman passed away in 1987 and Cage five years later, but even by the mid-’60s they sounded like ancient gurus trading koans. Feldman has rabbinical gravitas, and Cage’s pixie-ish voice is marked by a verbal tick, a frequent “Hmm?” that is at once inquisitive, probing, accusatory and rhetorical. The discussion was taped at WBAI in New York City and the transcript was collected as a book, Radio Happenings I-V (Edition MusikTexte), but it’s a unique treat to hear them live. 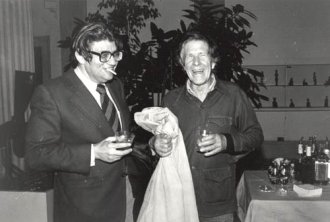