LITERAL:
“Here’s Jim Nollman in action, playing guitar to a killer whale off the coast of Russia. An artist and environmental activist, he’s founder of Interspecies Inc, an organization promoting the artistic interaction of humans and animals. Nollman got his start in interspecies music-making in the early 70s, jamming with 300 turkeys for a Thanksgiving Day radio piece. Blowing on his clay flute, he was able to induce the turkeys to gobble on key and on beat to his songs. He has since recorded interspecies music with wolves, desert rats, deer, elk, whales and dolphins. The Interspecies Inc website has various recordings of his gigs with whales and dolphins. My favourite is his early “Orca Reggae”, which I believe he recorded by playing a waterproofed guitar while sitting in a kayak equipped with an underwater speaker. As Jim points out, the whale does seem to have the chord changes nailed, and he could be right that it recalls “the way that Miles Davis soloed during his Bitches Brew Period”. You should check out the other underwater animal loops here – some solo, some interacting with instruments. I like the (Rock) Lobster and the Weddell Seal, which might make a cool bass drum sound.” 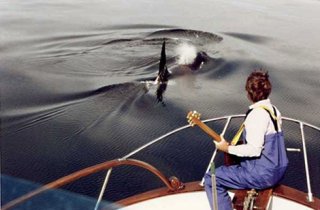