We present a musical keyboard that is not only velocitysensitive, but in fact responds to absement (presement), displacement (placement), velocity, acceleration, jerk, jounce, etc. (i.e. to all the derivatives, as well as the integral, of displacement).
Moreover, unlike a piano keyboard in which the keys reach a point of maximal displacement, our keys are essentially infinite in length, and thus never reach an end to their key travel. Our infinite length keys are achieved by using water jet streams that continue to flow past the fingers of a person playing the instrument. The instrument takes the form of a pipe with a row of holes, in which water flows out of each hole, while a user is invited to play the instrument by interfering with the flow of water coming out of the holes.
The instrument resembles a large flute, but, unlike a flute, there is no complicated fingering pattern. Instead, each hole (each water jet) corresponds to one note (as with a piano or pipe organ). Therefore, unlike a flute, chords can be played by blocking more than one water jet hole at the same time.
Because each note corresponds to only one hole, different fingers of the musician can be inserted into, onto, around, or near several of the instrument’s many water jet holes, in a variety of different ways, resulting in an ability to independently control the way in which each note in a chord sounds.
Thus the hydraulophone combines the intricate embouchure control of woodwind instruments with the polyphony of keyboard instruments.
Various forms of our instrument include totally acoustic, totally electronic, as well as hybrid instruments that are acoustic but also include an interface to a multimedia computer to produce a mixture of sounds that are produced by the acoustic properties of water screeching through orific lates, as well as synthesized sounds. 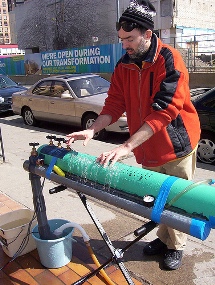