To the best of my knowledge, this is the first attempt to shed some light on the 78rpm “talking postcard”, which was known under many names in many countries, including: Sprechende Postkarte, Musik-Postkarte, Schallplatten-Postkarte, Tonbild-Postkarte, Talking Card, Gramophone Record Postcard, Phonogram Card, Singing Postcard, Carte Postale Parlante, Phono-Postal, Carte-Disque, and variations thereof. Although the invention dates back to 1903, collectors of shellac discs looked down on this artifact, presumably because none of the “big names” are captured on them. Likewise, collectors of phonographs or gramophones neglected the talking postcards, because they are difficult tor reproduce and tend to have a faint sound. Nevertheless, they are a fascinating subject not only for technical reasons but also because of their obvious social implications which latter aspect was in the foreground of a BBC radio feature in 2002 [Matthew Dodd & Alan Dein, “The Singing Postcard”, London, 18.08.2002].
A two-part history of the early phono postcards was published in German language as “Phono-Karten, eine industriegeschichtliche Entdeckungsreise”. {+} 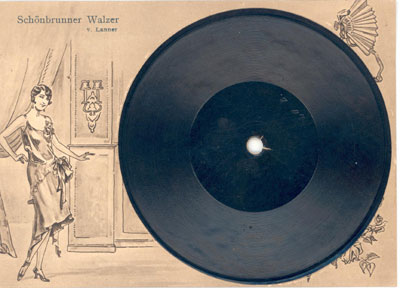