Into the Green | By Tobias Fischer

The Gruenrekorder label is presenting field recordings in full glory.

It is somehow bizarre that a lot of people still do not consider field recordings “music”. On the other hand, photography has had to go down a similar road of acceptance. What once appeared to be a “mere” trade has by now surpassed painting as the most influential of the fine/visual arts. It makes sense, too: After all, a photographer not only decides on the right motive, but also on factors such as lighting, angle, distance and she (or he) has more than just a handful of post-shooting techniques at his disposal to transform the picture’s qualitities even more. Gabi Schaffner hits the nail on the head with these comments in the introductory text to the second part of the AudioArt Compilation series, which, despite its shortness and thanks to its unacademic tone, is one of the best and clearest explanations of what this genre is about. “In the end”, she writes, “it is you who decides whether music is a territory divided up among various dogmas or an open source of inspiration.” And the Gruenrekorder label, who commissioned the tracks on this sampler, has always been on the inspirational side.
more… 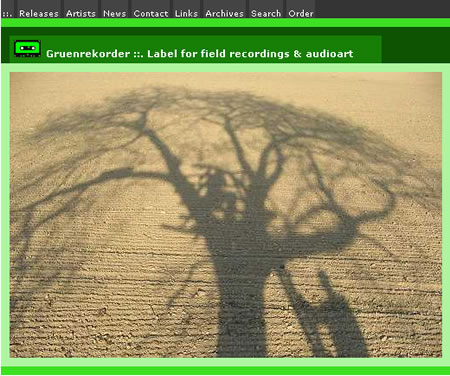