LITERAL:
The summer of 2004 has seen interesting discoveries in Canada and India that highlight a new branch of archæological research archæoacoustics. Old rocker PAUL DEVEREUX explains how we may now be able to hear the soundtrack of the Stone Age.

In the early summer of 2004, a research expedition consisting of two colleagues and me visited Canada to find out if the mysterious engraved and painted glyphs and signs of prehistoric American Indian rock art could, in a fashion, speak to us. We wanted literally to listen rather than to look. As perverse as this seems, it was in keeping with a newly recognised aspect of archæology called archæoacoustics. Archæologists have finally realised that ancient people had ears, and have discovered that various kinds of acoustic effects from eerie echoes to resonant frequencies that can affect the brain seem to have been an intentionally planned component of a number of prehistoric sites worldwide, from ruined temples to rock art locations. Prehistory is at last gaining its own soundtrack. […] 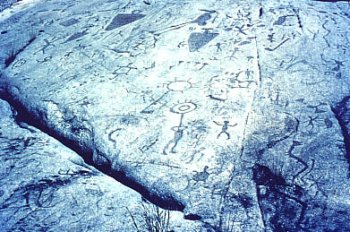