Sound, and the City Through Skateboarding

Project Description
Musique Concrete is an interactive performance piece which explores sound and the urban landscape through the movements on a skateboard. The result is a musical composition which transforms the skateboarder into a composer. It aims to provide an audience of all ages with a stimulating experience of new media, skateboarding, the city and sound.

How does it work?
Mounted underneath the skateboard is an interface which transmits data wirelessly to a laptop computer. Physical actions are detected using three sensors connected to the interface. Acceleration, turns and vibration are monitored by a photoresistor, a flex sensor and piezo sensor respectively. Using the MIDI protocol, a software program enables the skateboarder to control and modify real-time sounds directly from the skateboard.

An acoustical map of urban environment
Tricks and movements generate real-time sounds allowing the skateboarder to compose his/her soundtrack of the city. Furthermore, combining tricks and movements result in unique and often unexpected musical compositions. Used in conjunction with ramps, obstacles, ledges and other architectural elements, Musique Concrete provides the listener with a sonic imprint of the urban environment. 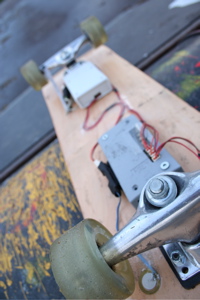 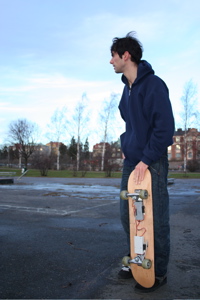