Invented and built by Cris Forster, the Chrysalis was his first concert-sized instrument. The instrument’s design was inspired by a huge, round, stone-hewn Aztec calendar. Cris thought to himself, “What if there were a musical instrument in the shape of a wheel? And what if this wheel had strings for spokes, could spin, and when played, would sound like the wind?” Thus, the basic idea of the Chrysalis was born. Built in 1975-76, the Chrysalis has two sides, or two circular soundboards, and 82 strings on each side. The wheel, which sits on the crest of a wave-like stand, may be freely spun in either direction.

Click here to listen to a sample of the Chrysalis

From 1991-2001, Cris wrote the 1300 page book Musical Mathematics: A Practice in the Mathematics of Tuning Instruments and Analyzing Scales. It is both a masterful historic document and a sound scientific document, from which generations of musicians and instrument makers can continue to draw sustenance and gain deep insight. Above all, it constitutes a bridge between the realms of Art and Science. 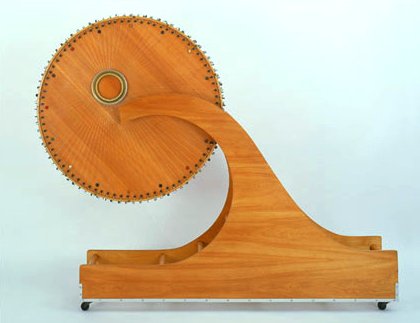