The Wave Organ is a wave-activated acoustic sculpture located on a jetty in the San Francisco Bay. The concept was developed by Peter Richards and was installed in collaboration with sculptor and master stone mason George Gonzales. Inspiration for the piece came from artist Bill Fontana’s recordings made of sounds emanating from a vent pipe of a floating concrete dock in Sydney, Australia.

In 1980, Richards (now a Senior Artist at the Exploratorium) received a planning grant from the National Endowment for the Arts which enabled him to conduct an extensive period of investigation into the physicality of the Wave Organ phenomenon. The sculpture’s speaker horn and audio equipment were either built or acquired for use in some of the experiments of this period.

Wave Organ
The Exploratorium’s Wave Organ on San Francisco Bay. Click on the image for a larger view.
A prototype, built at the same location, was presented as part of the New Music ’81 Festival. Though very rudimentary in nature, it generated enthusiasm and support for a permanent work. Permit acquisition and fundraising efforts by Frank Oppenheimer, founding director of the Exploratorium, began soon after, but actual construction did not start until September of 1985, seven months after Oppenheimer’s death. The Wave Organ was completed in May of 1986 and was dedicated in June to the memory of Frank Oppenheimer.

The Wave Organ is located on a jetty that forms the small Boat Harbor in the Marina district of San Francisco, walking distance from the Exploratorium. The jetty itself was constructed with material taken from a demolished cemetery, providing a wonderful assortment of carved granite and marble, which was used in the construction of this piece. The installation includes 25 organ pipes made of PVC and concrete located at various elevations within the site, allowing for the rise and fall of the tides. Sound is created by the impact of waves against the pipe ends and the subsequent movement of the water in and out of the pipes. The sound heard at the site is subtle, requiring visitors to become sensitized to its music, and at the same time to the music of the environment. 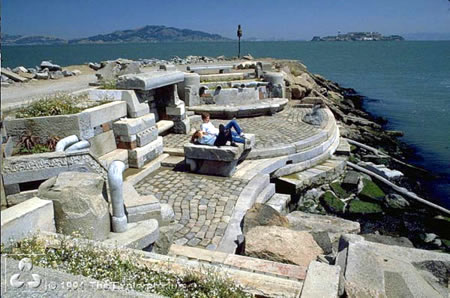