The Wine Music
by Tony King

“As far as i am aware it is the first time anyone has made an album of music where every sound hasbeen made from wine”.

track: journey to the barrel
[audio:http://www.makinwhoopee.com.au/winepiece1.mp3]

When consuming wine, you use all five senses — you smell it, you see the color, you feel the texture with your mouth, you taste it and you hear the pop of the cork or the clink of a glass during a toast. You can change and even enhance the first four senses by sipping a different wine — one with a fuller aroma, a little more color, a heavier texture or a more fruity taste. But nothing will change the sense of hearing — the cork pop and the clink stay pretty much the same regardless of the wine.

Until now, that is.

Tony King, an Australian musician, composer and wine aficionado, has expanded on what one gets from that fifth sense — he created music made exclusively from wine-related objects. He uses crystal glasses, corks, barrels and even his own breath as he blows into wine bottles to create incredible music that can sound like a pipe organ, Celtic whistles, or a Pan flute. It’s even been described as sounding like birds and whales, and in some cases, seems like a full orchestra. However one wishes to depict it, the music is a sound unlike anything else. It’s dreamy, it’s toe-tapping, it’s catchy. Although it’s not classical music per se, it has been the most popular music on Australia’s leading classical music station.

Probably everyone who has consumed wine at a dinner party has run a finger around the rim of a glass and listened to the vibrations. As the glass empties or fills, the sound changes.That’s exactly what King did. He borrowed about 40 glasses of all sizes and shapes, some from friends and some from Riedel, the famed Austrian wine glass company. Each created a specific sound — a shiraz glass sounds like a cello, a chardonnay glass is like a viola, and a Champagne flute is more like a violin or piccolo, or something with high notes. The sounds of a particular glass even appeared to match the wine — “The richer, deeper sound (of a Bordeaux glass) seemed to correlate to the taste of a Bordeaux,” he said. “A sauvignon blanc glass has a more crisp sound.” When he ran his finger around the Riedel Grand Cru Bordeaux glass, he said the table actually vibrated. (The glass is more than 10 inches high with a capacity of more than 30 ounces — to put it in perspective, a 750 ml bottle contains a little more than 25 ounces.) King used about 10 bottles of varying shapes and sizes, ranging from 375 ml to a Nebuchadnezzar (15 liters), then tuned them with varying amounts of wine by using an eye-dropper to achieve proper pitch. “One drop can make a note sharp or flat,” he said. “The bottles were the biggest surprise to me. If you put (the sound) on an oscilloscope, it would show a perfectly smooth pattern.”

He made considerable use of a single barrel, achieving about 20 different drum-like sounds, depending on where he hit it. “Even the metal band around the barrel made a different sound,” he said. “I used the barrel a lot.” Turning a cork in a bottle gives a squeaking sound, and, of course, pulling the cork provides the popping “thunk” we all know so well. Hitting a corkscrew against a Champagne flute sounds like an orchestra triangle, and tapping or flicking a finger against a glass will provide some unusual sounds, he said. How you move the finger on the glass changes the sound, he said. “Instead of going around (the rim), touch the glass quickly only about a half-inch, and it sounds like a violin,” he said. “If you tilt the glass, it changes the sound.” King used only objects associated with wine. “We filled the glasses only with wine, and we used wines I like to drink,” he said. “That was the reward after the recording session.”

Knocking on a barrel

He conceived the idea while walking through a winery in Southwest Australia. “They had barrels along the wall, and as I passed by, I knocked on one and I heard a great sound.” He hit it again, but in a different spot, and heard a different sound. “I started thinking of what all the sounds can be.” Then, as he sat at a dinner table and ran his finger around the glass, he heard the familiar sound, but it was a monotone. “I kept trying to think of how to get other sounds out of the glass.” The project took him two years to complete, working on and off. “I didn’t have a deadline, but I worked on it on (vacations) and I worked on it when I was feeling in a good mood.” King composed 11 songs, writing them to fit the sounds he could create, and the order in which they appear on the CD is almost like wine’s journey from the vineyard to the glass. In fact, the opening song is “Journey to the Barrel,” followed by “Sunrise on the Vine” and “Scarecrow Jig.” Among the other titles are “Perfect Blend,” “Soaked in Oak,” and “Toast to Old Friends.” Perhaps the most clever title is “Fugue Good Wines,” and as one listens to the song, it’s difficult to believe it’s not a full orchestra playing it. 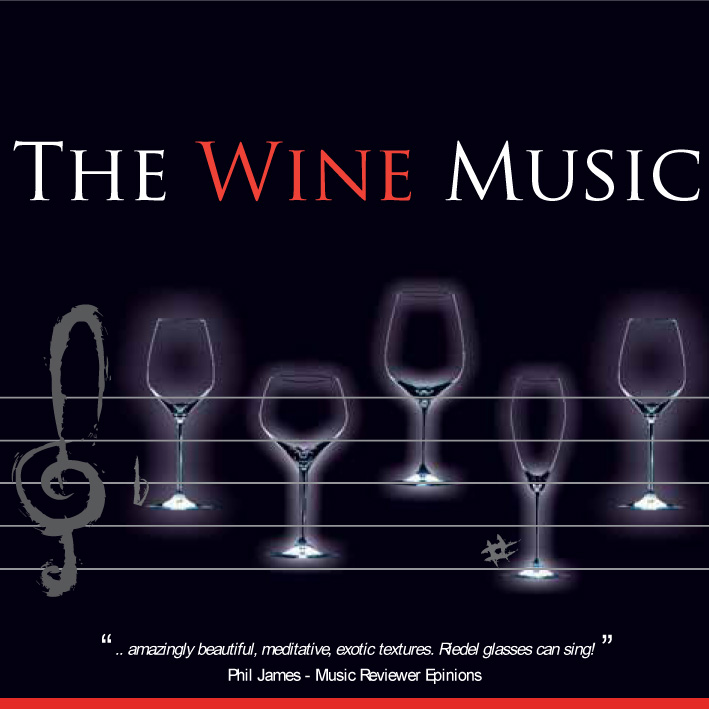