A city is but a constant audiovisual performance whose unfolding is contingent, where the decors are both static and dynamic, where the actors are also spectators, and where the musical accompaniment originates automatically from sounds caused by diverse visual parameters in varied and variable movements.
‘Sonic and Visual Structure’ by Nicolas Schöffera

Urban Sensorium explores the multi-sensory experience in urban environment enhanced and intervened by media technologies. From radio, internet to emerging wireless network and pervasive surveillant system, we got immersed in the invisible layers of electro-magnetic fields, which transforms the way we perceive and experience our daily lives.

Artists in the exhibition question the notion of public space and spatio-temporal reality while viewing city as soundscape, interface for cosmos, fluid canvas and site of scopophilia.a The binary between material/immaterial, city/nature, real/virtual, permanence/transience and private/public got fused into each other, contested, and redefined.

Urban Sensorium looks at not only visual but multi-sensory experience of sonic, visual, corporeal and architectural to find new perspectives toward urban mediascape beyond the surface of spectacles and commercial overloads. 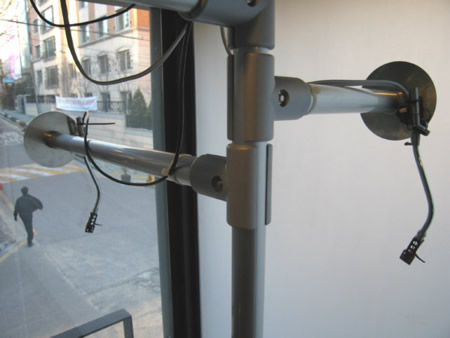